Get fresh music recommendations delivered to your inbox every Friday.
We've updated our Terms of Use. You can review the changes here.

Suite for Psaltery and Dulcimer 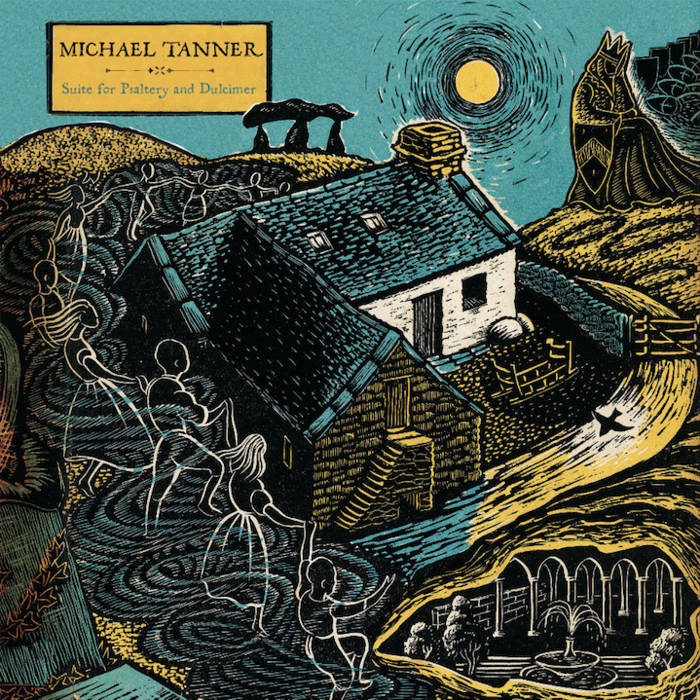 Psaltery Music is a new piece, recorded 2014 in Lewes, East Sussex.
Dulcimer i and ii originally appeared on 'Dulcimer Music', Apollolaan Records and have been remixed and remastered for this release.

"Michael Tanner (aka Plinth) lulls the listener into half-imagined worlds, drawing equally from vague memories of childhood (eerie books borrowed from the library, quaint otherworldly television serials, hours spent exploring old attics and junkshops), and a heartfelt love and appreciation of the English countryside and the ancient villages dotted around it. His songs have been likened to 'little spells', and hearing them fade out for the last time is to be gently roused from a dream and, perhaps sadly, returned to the present time."

Michael released Wintersongs through Kit in 2014, and returns this year with 'Suite for Psaltery and Dulcimer' - a limited LP inspired by '70s new-age cassettes and the shape of the Sussex landscape.'

'Our collective relationship with nature and the past were at one time much more closely tied than they are now. Memories and tales were married to geography, word of mouth, and the distance one could travel by foot to tell and be told. However, while the gap gets closed by the digitisation of the indoor world, the outside world of the English countryside remains much the same. Grey and damp; imbued with the scent of decaying bark and cow pats, and dotted with steam train and spice museums. Recently, the likes of Ben Wheatley’s Sightseers or Will Sharpe’s black comedy series for Channel 4 Flowers, both vividly evoked the distinct visual nature of the English pastoral scene — equal parts grim and beautiful, the damp practically emanating from the screen.

The latest release from Kit Records by Michael Tanner is a stunning instrumental evocation of the same spirit, mired in the ancient wood and damp grass, haunted by memories. The likes of Richard Skelton have applied similar durational and instrumental techniques to impressionistic musical British landscapes, sketched utilising multiple cellos, violins, and guitars, but Michael Tanner focuses almost entirely on the two instruments namechecked in the album's title, Suite for Psaltery and Dulcimer.

Under his own name and as Plinth, Tanner’s taken cues from a few different sources in the past when shaping out music of the Sussex landscape. The bounty of waging, new age cassettes, originally designed as bliss out music for hippies, and now the sonic food of choice for many a blog, is one such key inspiration. Tanner’s Witch Elder tape out on Reckno records in 2012 used only a ‘Broken Casio PT-30’ to create drifting synthscapes that rolled on and on like the scattered greens of Sussex meeting the South Downs at the sea; akin to Popol Vuh’s Aguirre were Klaus Kinski exploring the chalky British coastline rather than the Amazonian heart of darkness. Witch Elder saw Tanner assisted by sporadic bouzouki notes from Paul Condon of United Bible Studies, the loosely knit experimental folk collective based out of Ireland (Tanner is also an on/off member), and violist Alison Cotton and percussionist Matthew Shaw compliment Tanner similarly on Suite for Psaltery and Dulcimer. For the most part though, it’s a powerfully beautiful exploration of both the plucked, harp-like psaltery and effects-laden bowed dulcimer that, far from leaping into a cosmic wormhole like Laraaji, stays closely tied to the the lady Gaia.

The first side contains one single 21-minute piece based around the lethargically plucked psaltery by Tanner. Kit Records notably mention how the pieces aren’t really ‘songs’ or ‘pieces’ at all, and that they’ve been likened to ‘little spells’. Throughout the duration of ‘Psaltery’ an ethereal environment is conjured before us, evolving through various shades and tones, even volumes. The opening minutes have strings plucked through a sketched semblance of melodies and chords in a forlorn mode, drifting without rhythm surrounded by plentiful vacant space. The entrance of Alison Cotton’s viola ushers in a flurry of psaltery notes rushing like a stream, and the centre of the piece exchanges overflowing sadness with a sort of latent bliss, both Tanner and Cotton’s strings jangling like wind chimes. They slowly dissolve for the final third of the ‘spell’, and when they’ve disappeared it is very much as if waking from a dream.

‘Dulcimer I’ and ‘Dulcimer II’ date back originally to a CD-R put out under Michael Tanner’s Plinth nom de plume in 2009, and see bowed melodies arising and interleaving from a dulcimer. The full original release also featured contributions from Richard Skelton and Aine O'Dwyer, but the remastered tracks here include only marginal atmospheric interjections from percussionist Matthew Shaw, tinkling away bell-like tones deep in the background on ‘Dulcimer I’. The intermingling bowed notes from the dulcimer crisscross constantly throughout the pair of ten-minute long pieces, to the point where the boundary lines of each sound disappear. The entire experience becomes one gradually ebbing fog of ancient string drones.

Like the landscapes and dotted villages that inspired it, this music is an emotionally complex creature trapped in time, and somewhere in between nature and artifice. Painting in such broad musical strokes is never going portray precise images or specific narratives, but the feelings that increasingly wash over you while listening to Suite for Psaltery and Dulcimer are definitely searingly potent. The physical world dissolves as we’re lulled into a dreamworld - and when it disappears, it’s hard to let it go.' - Tristan Bath, The Quietus

'Michael Tanner makes remarkably elegant and literate folk music which derives inspiration from an imagined future as much as from a reimagined past. Suite For Psaltery and Dulcimer is an exquisite album which deconstructs the idiom to create an unusually refined suite of surrealist folk instrumentals.

Side one of the record is entirely devoted to a psaltery composition, punctuated by Alison Cotton’s sublime and swooping viola, while side two consists of two separate bowed dulcimer laments. The beauty of the album lies in the absence of any overt explanation behind the songs; accordingly, each is ripe for interpretation, to breathe and exist outside of any specific context. And the Psaltery side in particular is dazzling to listen to where the seemingly most gentle of sounds do the greatest amount of work.

To listen to Suite For Psaltery and Dulcimer is to become intoxicated by Tanner’s talent, not just as a musician but as an arranger – these songs develop and unfold at a pace far removed from linear time, as if such earthly concerns are no longer of consequence. An album deceptive and devastating in its simplicity; an often profoundly moving piece of work.' - Colm McAuliffe, The Skinny

'A son of Dorset, the now Sussex-dwelling Michael Tanner has for over a decade been releasing a steady stream of high quality, emotionally engaging and subtly structured ambient-orientated music. An acoustically-wise soundscape artist, best known under his Plinth guise, he has also periodically shapeshifted into The Cloisters and is a member of the elusive but Wire magazine beloved United Bible Studies. In 2001 he appeared alongside Directorsound’s Nick Palmer, as one-third of The A Lords, whose critically acclaimed eponymous album engendered the re-discovery of late-’60s cult singer-songwriter Mark Fry.

My own first exposure to Tanner’s work was in 2006, when I fortunately obtained an early version of what is still arguably his most completely realised opus, Music For Smalls Lighthouse (as Plinth). Recently re-released on vinyl by Clay Pipe Music, it’s a piece of considerable scope and in its subject matter and execution could well be regarded as the progenitor of the entire psycho-geographical ambient oeuvre, with a freshening splash of neo-gothic folkiness on the side.

What has always been the most intriguing element throughout the wandering Tanner’s varied musical projects is the prevailing sense of composed gentleness. It’s a form of music that is reflective to the point of introversion, yet what comes across both clearly and repeatedly (and with a paradoxical energy) is the sense of an individual telling a series of musical tales. Over time, Tanner has appeared to comfortably oscillate between major and minor scale compositions, rather as an actor alternating between large and small roles. It’s an excellent strategy, allowing him the space to change musical gear and avoid the ubiquitous ambient-trap of ‘forever making the same piece, just making it more so’. Yet whatever the scale of the mood aimed for, what unites all of Tanner’s works is a considered and elegant mode of sonic execution.

Suite For Psaltery And Dulcimer lives somewhere in the middle of this framework. What is evident, here, is that Tanner is in the process of freeing (sic) himself from environment-based sources of both sound and inspiration into a more abstract, more intellectualised realm. The twenty-one minute long opening section “Psaltery” opens with a series of simple, overlapped, dulcet dulcimer meandering semi-tunes evolving, upon the entry of Alison Cotton’s delicate viola tracery, into a more complex series of arpeggiation texturally reminiscent of the early Eno/Fripp album No Pussyfooting, had they decided to calm it right down and do the whole ticket unplugged. The latter more drift-orientated part of the piece is light and airy but, like all good drift, has an implied rhythmic sway lurking beneath its amorphous surface and includes a wonderfully constructed, merge-into-shadow, long fade. The two companion pieces, “Dulcimer 1” and “Dulcimer 2” present a more treated and high stratosphere formation of densely stacked legato loops, the former joyously classical and the latter darker with a murky undergrowth of early music tonalities.

Always a composer of considerable ability and noticeable balance, on Suite For Psaltery And Dulcimer Michael Tanner has fashioned a captivating exploration of musical form, tone and volume. Turn it up or turn it down, you won’t be disappointed.' - Delusions Of Adequacy

'Two obsolete tools for three long play out of time: this could be summarized the work of the new formula of Michael Tanner , an artist like few other quirky than expressive contemporary currents prevalent, yet right for this always extremely challenging in its raids sound through a countryside enchanted.

Once again, it is not a sound environment simply "postcard" that brushed the three movements of "Suite For Psaltery And Dulcimer", realized by the versatile British artist with just the additional help of the purple Alison Cotton and Matthew Shaw percussion. The opera scene is still dominated by the two stringed instruments played by Tanner, who over the more than twenty minutes of the song to the psaltery sweep delicate acoustic textures, creating un'ambience meditative harmonic loop consists of trembling, just above the level of perception, distillates from plucked strings with seraphic asceticism.

Richer and decided instead appear the two movements on the dulcimer, which open to an ecstatic dimension of chamber minimalism, in a dialogue with the prolonged vibrations of the strings that become increasingly hypnotic way, donning a shiny patina, really can achieve a pleasant state of contemplative abstraction.' - Music Won't Save You (Translated from Italian)

'musics imbued with dreams of rural Sussex and memories of strangeness in the 70’s ... rich, woozy melodic' - Norman Records

Sleeve from a print by Ivor Owen
Layout by Rebecca Machin

Alex Rita and Errol from Touching Bass feature in our special London edition of the Bandcamp Weekly.